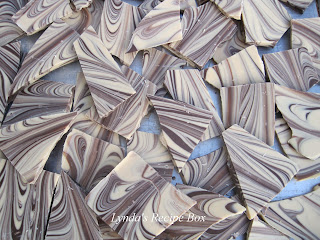 Need some homemade goodies for gifts still? This Tiger Butter candy is easy and quick to make, plus it tastes amazing too. If you've ever used Almond Bark, you can guess how easy this candy is. Almond Bark is found on your grocers baking isle, close to where the baking chips are. 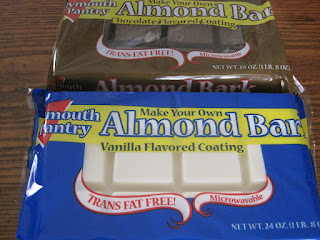 In this recipe, both vanilla and chocolate Almond Barks are melted. Peanut butter is stirred into the vanilla. The peanut butter flavored Almond bark is poured into a prepared pan. Then the melted chocolate is spooned in stips over the peanut butter mixture. 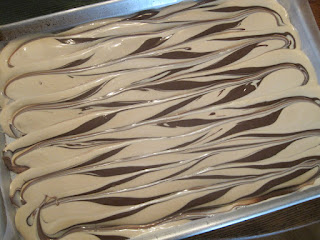 I drag a knife through the candy to cause a marbleized effect, then run the knife through again in the opposite direction. You also could just drizzle the chocolate all over the peanut mixture if desired. 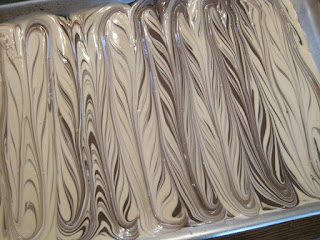 Now it needs to set and harden. My kitchen was rather warm because of baking, so I placed the candy in the refrigerator to harden. Then brake it into pieces and devour.Yum! This is a perfect gift for friends, family, teachers, mail carriers, whomever. My husband loves this stuff, so I may have to make another batch for gift giving. 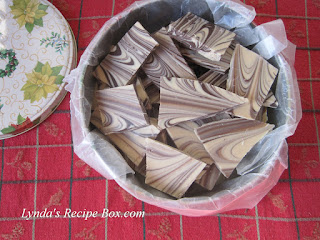 Tiger Butter Candy
Recipe from a friend of my husbands

1. Melt the Vanilla Almond Bark in a large microwave safe bowl. Do it in 1 minute increments, so that you don't cook the candy and cause it to seize. Or melt candy in a double boiler if desired.
2. When completely melted stir in the peanut butter until smooth.
3. Melt the chocolate in a large bowl. It took about 1 1/2 minutes in my microwave.
4. Line a large baking sheet, ( 12x17 inches) with wax paper or parchment paper. Pour the Vanilla Bark mixture into the pan and spread it out evenly.
5. Spoon strips of chocolate over the melted Vanilla Bark mixture.
6. Drag a knife across the width of the pan to swirl the cany mixture. Then drag the knife across the length of the pan. Or, drizzle the chocolate over the vanilla,if desired.
&. Let the candy cool and harden. Keep away from the heat. Enjoy!