Mushroom and Pepper Frittata for Two 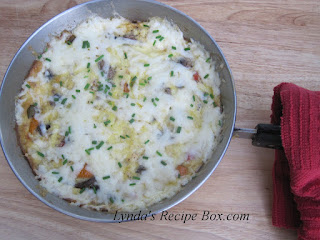 Sometimes I need an easy meal. Just like everyone else, My husband and I have very busy lives. I'm now back to babysitting our adorable granddaughters; the on-the-go 3 year old, and her almost 3 month old baby sister who so far is rather laid back and still likes to sleep most of the time. So every weekday is very busy, and sometimes unpredictable. Last night I wanted something quick to make so I scouted out the fridge and used just what was available to make a Frittata for Two. It's not fancy, and it won't make it into the latest cooking magazine, but boy was it good! Filled with mushrooms and those small, sweet mini peppers that are in the produce isle, and a few other ingredients, I had a main dish ready in just a few minutes. And it was so good with toast and fresh fruit. 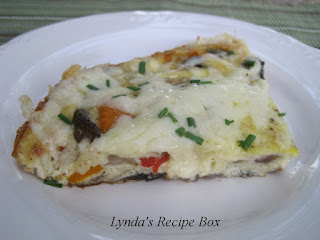 Mushroom and Pepper Frittata for Two
from Lynda's Recipe Box
Just about any veggies and any cheese will work. I used ingredients that were just leftover basically. Zucchini is good too. Here's my list.

Preheat oven to 350 degrees. Prepare the peppers and mushrooms and onions, or other veggies of choice. Beat the eggs and half and half in a bowl with some salt and pepper. Heat an 8 inch skillet over medium heat. A non-stick skillet would be perfect, but I used a stainless steel pan and it worked fine, but I needed more fat so the frittata wouldn't stick. Also, make sure your skillet is oven safe.
Add 1 tablespoon butter to skillet. When it is melted add the mushrooms and stir around for a couple of minutes. Add the onions and peppers, and more butter only if needed and season with a little salt. Saute until softened a minute or two. Add the egg mixture and shredded cheese to the skillet and mix. Let cook a couple of minutes. Place frittata into the oven and bake for 10-15 minutes, until the frittata is set. It shouldn't jiggle when shaken. Add a bit of cheese to the top is desired,and bake for a minute,just until cheese is melted. Carefully remove skillet from the oven. NOTE! Handle is screaming hot! IT is so easy to forget to use a potholder when taking this out of the oven. (Has anyone other than me ever grabbed a handle in the oven, not thinking?  sigh.) Cut and serve; it is yummy.
Posted by Unknown at 10:22 PM