How To Make Fresh Harvard Beets 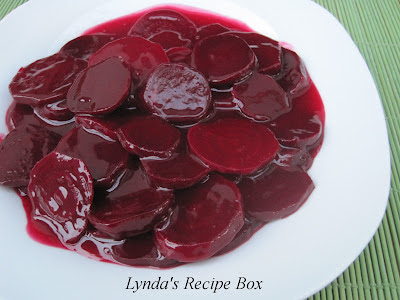 Harvard Beets are a little tangy, a little sweet and a whole lot of yummy. My Mother-in-law used to make these occasionally, and I fell in love with their tangy, sweet goodness. She didn't have a recipe, she just had made them for so many years that throwing them together seemed to be second nature. At one time she told me how to make them, but I have lost her instructions, so I searched the Internet for a recipe. Last week at the farmers market, I found only one bunch of beets left to buy, so I had pity on them and brought them home. Our temps have been in the triple digits for several weeks now, so this bunch of beets were looking a bit stressed. 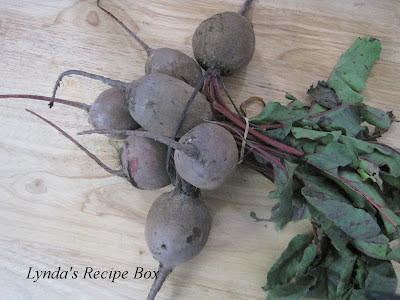 Even though the beet greens didn't look very fresh, the beets were delicious. You can make Harvard Beets with canned beets, but using fresh beets is so very easy and fresh tasting. The recipe I used called for oven roasting the beets, but I hated to turn the oven on for just a pound of beets, so I boiled them on the stove-top for about 40 minutes instead. This was a perfect blend of sweet and sour. My husband doesn't care for beets, so they were all mine! Hope you give this old favorite a try. 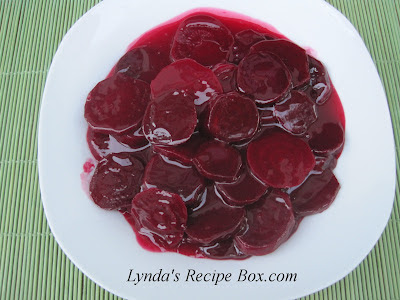 Directions:
Cut off all but 1/2 inch of the beet tops; wash beets and place in a pan and just cover with water. Bring to a boil, reduce heat, and cover. Simmer beets until they are just tender but not mushy. This could take 30-40 minutes, or even longer, depending on the size of the beets. Remove the beets from pan and cool until cool enough to handle. The beets will peel easily now, even by using your fingers, but a paring knife is fine too. Cut off the root end and the remaining tops. Now you my slice the beets, or cut the beets into cubes. I went with the slices.
In a sauce pan mix the sugar, and cornstarch. Add the water and vinegar and mix until the cornstarch in dissolved. Bring to a boil. Add the sliced beets and cook until thickened. Remove from heat and stir in the butter. Let the Harvard Beets cool to room temperature. Devour. Hope you enjoy!
Note: They are best served at room temperature.
Posted by Unknown at 10:00 PM

Email ThisBlogThis!Share to TwitterShare to FacebookShare to Pinterest
Labels: beets, side dish