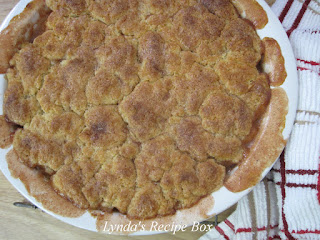 Peaches are in season here now and I just can't resist a good peach cobbler. If you don't want to take time to make a pie, a cobbler is the way to go. The peaches in this cobbler are fragrant with cinnamon, and the delicious topping is almost scone like. The crisp topping is tender and buttery and a perfect crust for this dessert, plus it smells fabulous while baking. 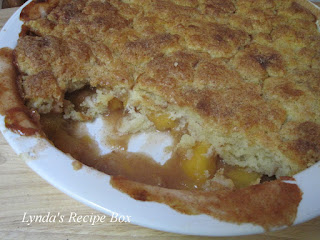 This Peach Cobbler is best the day it is made. After it comes out of the oven, let it cool until it is just warm, and the crust will be nice and crisp and buttery. If there are leftovers the next day, the crust softens, just like other cobblers. It is still delicious though, especially with a scoop of vanilla ice cream or frozen yogurt. I adapted this recipe from Tyler Florence, but I left out the alcohol, and I cut out some of the butter of his recipe. We didn't miss it at all. It's such a delicious summer dessert so I hope you'll give it a try. 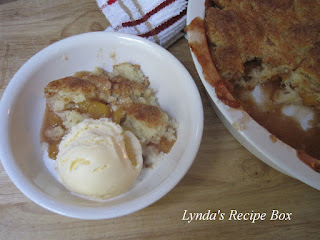 Peach Cobbler
Adapted from Tyler Florence
Notes: You could also use frozen, sliced peaches that have been thawed. Also, you can sub half and half or milk for the heavy cream; the topping will be less rich, but will still taste great.
This cobbler can also be made in a 10 inch cast iron skillet, although, I have not tried it.

Directions:
1. Preheat the oven to 375 degrees F. In a large bowl, combine the sliced peaches, sugar, cinnamon and cornstarch; set aside.
2. In another bowl, mix the flour, salt, and baking soda together. Cut the butter into small pieces and cut into the flour with a pastry blender until the mixture looks like small crumbs. Pour the cream into the flour mixture and mix until the dough just comes together. Don't over-work the dough; this is like a very rich biscuit or scone dough.
3. Melt the 1 tablespoon of butter in a skillet over medium-low heat. Add the peach mixture and cook until heated through for about 5 minutes. Transfer the mixture to a 2 quart baking dish. Drop the dough by tablespoons full over the warm peaches. There will be gaps, but the topping spreads and puffs up as it bakes. Brush the top of the dough with a little heavy cream and then sprinkle with cinnamon and sugar, if desired.
4. Bake in the oven, on a baking sheet until the cobbler is browned and the fruit is bubbly, about 40-45 minutes. (The filling will bubble over the edge of the pan.) Serve warm with ice cream. So yummy!

Note: If you have a fruit peeler that will peel the delicate skins of peaches, you are all set. But if not here's what you do. Bring a large pot of water to a boil. Fill a large bowl with cold water and ice so you can cool down the peaches. When the water is boiling, drop the peaches in the boiling water and boil just for 45-50 seconds. Quickly lift the peaches out of the water and place them in ice water to stop the cooking. Leave them until they are cooled down. Remove peaches from water and they will now peel easily with a paring knife.
Posted by Unknown at 10:11 PM