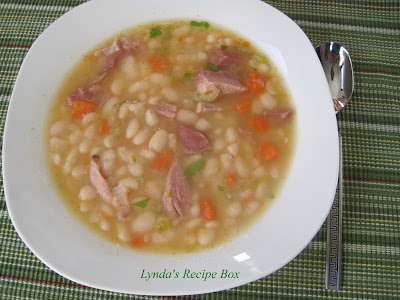 Christmas is over for another year. It takes so long to get ready for Christmas, and then it's over so quickly. And the meals take hours of  preparation, and then we eat and you have a ton of leftovers. It's a good thing we like leftovers.But we'll do it all agin next year, and enjoy every minute of it.
We always bake a bone-in ham for our Christmas dinner. No other kind will do, and that gives me a ham bone to use for cooking a pot of bean soup. I make sure to leave some meat on the bone so that the beans will have some meat in them too. 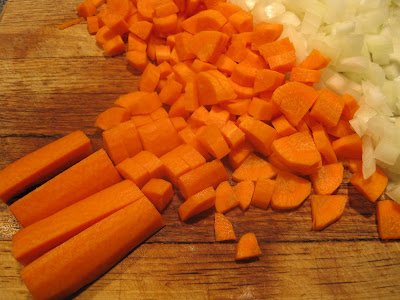 I chop up some vegetables to add to the pot and let it all cook into a delicious and hearty soup. And of course there must be corn bread. I used Great Northern Beans for this soup, but you could also use navy, or cannellini beans. Sometimes I make Pinto Beans and Ham, which are also delicious. So leftover ham is a good problem to have. I always soak the beans in water overnight, or else I use a quick soak method, where you bring the beans to a boil, then cover and remove from the heat to let them soak for 1 hour. Then pour off the water. Add more water to the pot, then begin to cook. After wards you'll have a pot of delicious comfort food, White Bean and Ham Soup. 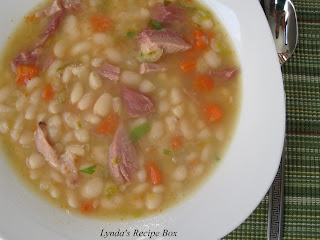 1. Sort the beans and then soak the beans. I pour part of the beans on the counter and go through them to remove any dirt or small particles of rock that may have snuck in the bag. Repeat until all the beans have been sorted. Rinse the beans well under water. Place in a soup pot. Add water to cover. I gave the beans a quick soak by bringing the pot to a boil, then turning off the burner, cover and let them soak for 1 hour. Pour off the water. Place the beans back in the soup pot on the burner. Add the ham bone, the chicken broth and the water. Bring to a boil, reduce heat to low and cover.
2. While the beans are cooking, dice the onion, celery and carrots. Add to the pot with the bay leaves. Cook, covered for about 1 1/2 hours, or until the beans are tender. Beans will smash easily against the side of the pan when they are done.
3 Remove the ham bone from the beans and cool until cool enough to handle. Now, I like the bean soup to be a bit creamy with a thick broth, so I take a big spoon and smash some beans against the side of the pan  and stir them back in. I do this several times until the soup begins to look creamy. I guess you could use an immersion blender, but I haven't tried that.
4. After the ham bone has cooled enough, take the meat off the bone and discard any fat. Put the ham into the soup and season well with salt and pepper. I used about 1 1/2 teaspoons salt in this soup, but it will depend on how salty the ham is as to how much you have to add. Serve this soup with a huge chuck of corn bread and enjoy!