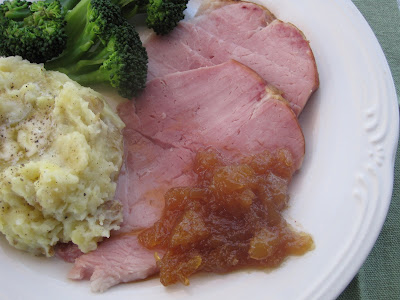 I've been experimenting again. Sometimes I think I have such a great idea and I won't quit thinking about it until I just follow through with it. Sometimes it turns out well, sometimes not. This method turned out very good! We loved the ham cooked this way.
I decided to try cooking a ham in my crock pot, thinking it would make an occasional Sunday dinner a bit easier. I don't want to be sitting in church and wondering if the ham in my oven is burning, so thus the crock pot reasoning. If I cook Easter dinner this year, I want it to be easy. I want a great meal, and I want my day of rest too! Ha Ha!
Technically, the crock pot did work. I knew that other people use it for ham, but I hadn't tried it. Also, I love an orange glaze on ham, but decided to try pineapple this time. I had the idea of using crushed pineapple, so I poured a can of it over the ham, added some brown sugar, (I wanted to add some maple syrup but was out), and let it cook away. Son number 1 stopped by to pick up my little granddaughter, and couldn't resist carving himself a hunk of ham. He declared that it had great flavor. Really great flavor.
My husband and daughter said it was good also. Me? I have to admit that the combination of the brown sugar and pineapple was delicious. It cut through the saltiness of the ham quite nicely. Here's the experiment; I thought I'd try cooking down the juices and the crushed pineapple to use as a chunky sauce. It was very rich, way too rich, and it was hard to skim all the fat off of the chunky pineapple broth. I won't try that again. The next time, I'll just cook the ham in the pineapple and brown sugar, and leave it at that. The ham was very flavorful and it was so easy. I will not thicken the sauce next time. So, using the slowcooker did work for me, I just need to tweak my method some. Here's what I did this time. I'll update this post when I am completly satisfied with the outcome. UPDATE: 3-23-12- we still love the ham cooked this way. Don't mess with making a sauce, but you can spoon the pineapple over the sliced ham if desired, but it really doesn't need it.

Place the ham in slowcooker cut side down. Pour the can of crushed pineapple over it along with the brown surgar. Cook covered for about3-4 hours on high, or 5-6 hours on low.  Since I used a fully cooked ham it mostly just needed to be heated, but I like it cooked a bit longer for tenderness. Just don't overcook or it will be dry. Here's how I made the too rich sauce;  pour it into a sauce pan and let set untill the fat separates and rises to the top. Carefully skim all the fat off the pineapple mixture and discard. Bring the mixture to boil, reduce heat to a simmer and cook until it is reduced and somewhat thickened. Serve along side the ham. So, the results of my experiement? I will use my slow cooker for ham again. But don't thicken the sauce. So, cook your ham in the slowcooker with brown sugar and pineapple. It will be delicious. But don't make my sauce!
Have you tried using the slow cooker for ham and were you happy with the results? I could use some ideas!

NOTE: If you don't use a fully cooked ham, cooking time will be longer. Also, make sure the ham you buy will fit into your slowcooker.
Posted by Unknown at 10:36 PM