Western Omelet For One (with a side of fried potatoes!) 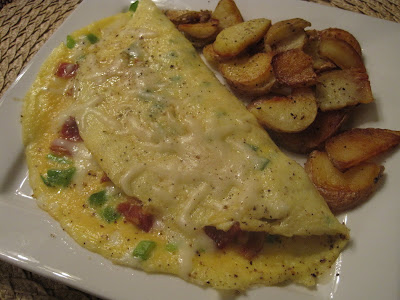 I was by myself this evening so I decided to make an omelet and some fried potatoes for my dinner. I like a Western Omelet, which usually contains ham, bell peppers and onion and maybe some cheese. Well, I had no ham, so bacon took it's place very nicely. From what I've read, this omelet may also be called a Denver Omelet, or a Southwestern Omelet. Which ever name you call it, it is really delicious and so easy to make. The veggies can be sauteed until they are soft, or you can add them to the egg uncooked, which is what I did this time. Either way it's good. 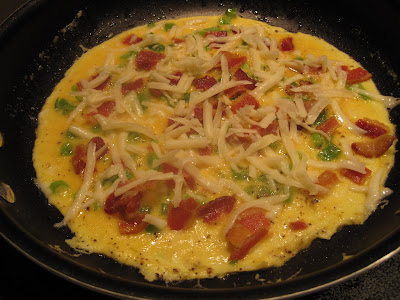 Pour the eggs in the skillet, top with the veggies and cheese. Add the bacon and fold over. Add more cheese if desired. And I love it served with salsa. Here's what I did. 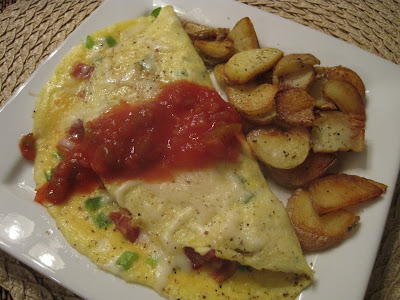 WESTERN OMELET FOR ONE
from Lynda's Recipe Box
2 large eggs, well beaten
about 1/2 tablespoon half and half, or milk
about 1 tablespoon or so of diced bell pepper
1 small green onion, sliced
2 strips of bacon, cooked crisp (or diced, cooked ham)
Monterrey Jack Cheese, shredded (or cheddar)
salt and pepper to taste
Beat the eggs and half and half, or milk, together and pour into a nonstick skillet over medium to medium-low heat. Stir in the onion, bell pepper and bacon (or ham); add salt and pepper. Loosen the edges of the omelet and tilt the skillet, letting the uncooked egg run to the sides. Add the bacon and the shredded cheese and fold the omelet in half when the eggs are still a bit wet looking. Take the skillet off the burner, add more cheese to the top on the omelet if desired. Place a lid over the pan to let the eggs finish setting and the cheese melt. Slide your delicious omelet onto a plate, add salsa and devour. This is my favorite way to make an omelet. How do you like yours?
NOTE: For the fried potatoes, I partially cooked 3 small Yukon Gold potatoes in the microwave. Then I sliced them thin and cooked in a little butter in a small skillet. Seasoned with only salt and pepper, they were golden, crisp and delicious.
Posted by Unknown at 10:14 PM