What to do with those Thanksgiving turkey leftovers! 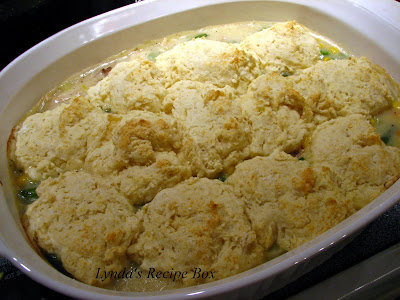 Got Turkey? Make a delicious Pot Pie. You can't go wrong with this classic dish. 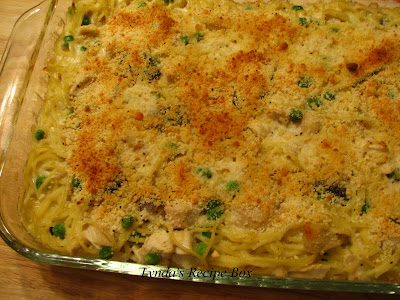 Or how about Turkey Tetrazzini? This casserole is great with leftover turkey, or even chicken. 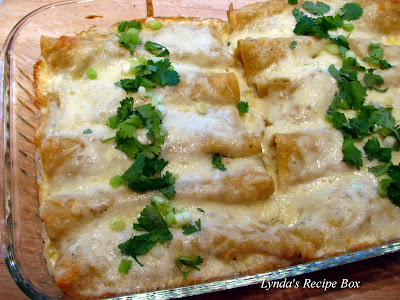 Use turkey, instead of chicken, in these yummy Enchiladas with Sour Cream Sauce.
These are just a few ideas to use up your Thanksgiving bird. Have a wonderful weekend my friends!
Posted by Unknown at 7:46 PM 12 comments: 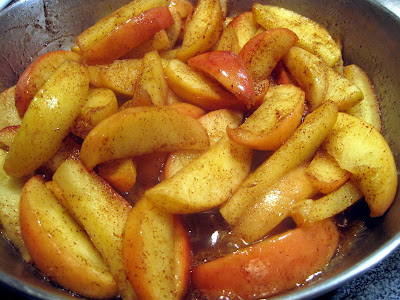 I have great memories of my Grandmother cooking Fried Apples many times when we went to visit her. The kitchen was filled with such a wonderful cinnamony apple aroma that would waft through the kitchen into the rest of the house. They are so quick and simple to make and are delicious with pork and poultry. Apples, cooked in butter, sugar and cinnamon-what could be better? My Grandmother occasionally served Fried Apples for Thanksgiving, and they are also delicious served for breakfast. Make a large batch though, as they are very addictive, and won't last long. My favorite apple to use are Granny Smiths, or other tart apples. This time I used Gala apples, which are a bit sweeter, so I squeezed a bit of fresh lemon over the apples as they cooked. I normally peel the apples before cooking, but was in a hurry and didn't this time. I actually prefer them peeled as the apple skins can be a bit tough after cooking. Granulated sugar or brown sugar can be used and cinnamon is a must. I cooked these for my husband and I for dinner the other night. I should have doubled the amount as my husband devoured them and I had to fight for a portion! So make plenty! 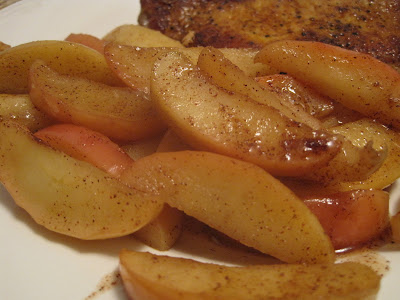 SOUTHERN FRIED APPLES
from Lynda's Recipe Box
I don't usually follow a recipe, but wrote one down this time so I could share. The amount of sugar used will depend on the type of apples used.
1 pound apples (preferably tart), peeled and cored and cut into slices
1 tablespoon butter
2 tablespoons granulated or light brown sugar
1/2 teaspoon ground cinnamon
a squeeze of fresh lemon juice, if desired
In a skillet, melt the butter over medium heat. When butter is bubbly, add the sliced apples into the pan and stir until they are coated with butter. Let them cook a couple of minutes, stirring gently and then add the sugar and cinnamon which has been mixed together. Cover pan with a lid and cook for about 5 minutes. Check apples as they cook rather quickly this way. When the apples are tender, uncover and cook until the juices are thick and bubbly. If there isn't as much syrup as you would like, you may add 1 tablespoon of water to the skillet after you remove the lid, and continue cooking until thickened. Don't stir too much at this point or the apples will fall apart. Total cooking time will depend on the amount of apples you are cooking. These were done in 10 minutes, but a large pan full will take a bit longer. Remove apples to a serving dish. Enjoy!
I think they are best after they cool down a few minutes, and I even love them at room temperature. 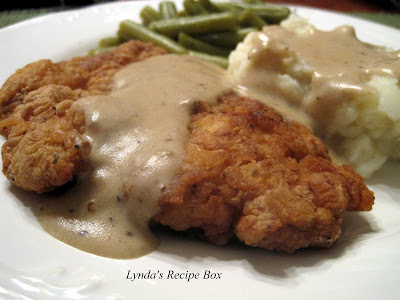 Sometimes I get really strong cravings for certain foods, especially comfort foods. Fried chicken would be one of the strongest. It was one of my favorite meals growing up, plus anytime I go to the grocery store, the deli is cooking it and the aroma calls to me. But it's not as good as homemade. I don't indulge often, and sometimes when it's just my husband and me, I use boneless, skinless chicken breasts. They are so handy, plus they cook quickly, making this a treat that I can even make during the week. Crisp on the outside, tender and juicy on the inside and topped with cream gravy and mashed potatoes on the side- that's good eating. Let me tell you, this meal satisfied my craving nicely -until the next time, that is. This is more of a method than a recipe, so measurements are approximate. I don't make this often, but this is one of my favorite comfort meals. Enjoy!

4 tablespoons oil(could need more, depending on size of skillet-oil should cover the bottom of pan about 1/8 inch deep )

Place each chicken breast between plastic wrap(one at a time) and pound with the flat side of a meat tenderizer, or a rolling pin, to an even thickness. Should be about 1/4-1/2 inch thick. Place on a plate. Place seasoned flour in a shallow bow. Mix egg and milk in another shallow bowl. Season chicken lightly with salt and pepper. Take one piece of chicken and dredge in the flour, shaking excess off. Then it goes into the egg, again shaking off excess. Dredge it again in the flour and lay it on a plate. Repeat with other chicken.

Heat oil in a large skillet over medium heat. When oil sizzles, place chicken pieces in oil and cook until golden and you can see the chicken turning white around the edges, 3-4 minutes. Turn chicken over and continue cooking, another 3 minutes or so. Remove chicken from skillet to another pan. Place in a 200 degree oven to keep warm while you make the gravy.

Remove all but about 1 tablespoon oil from the skillet, but leave in any brown, crispy pieces from the chicken. Add 1 1/2 tablespoon of flour to the oil and stir, letting the flour cook and brown a about 1 minute. Whisk in about 1 cup milk. Keep whisking as it begins to cook and thicken. The longer it cooks the thicker it will become, so you may need tot add more milk. Season with salt and plenty of pepper. I like lots of pepper in cream gravy. This makes about 1 cup of gravy, so you may need to double it if cooking for more than two or three people.

NOTE: If making mashed potatoes, start them first, before you start the chicken, because they will take longer to cook. 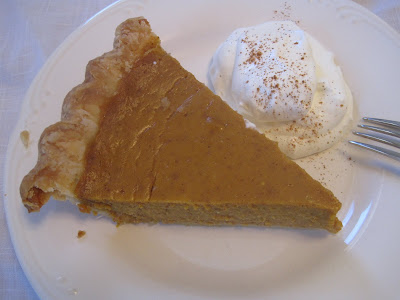 I love baking in the fall. I love the spicy aromas and I guess the comfort foods that I just can't resist. And pie is hard to resist, especially Butternut Squash pie. It tastes like pumpkin pie, in case you've never had it. The first time I ate this delicious pie, my Mother-in-law made it for Thanksgiving. Our boys were confirmed squash haters. They wouldn't eat squash of any kind. So, my MIL made this Butternut Squash Pie, but didn't tell the boys what it was. As they were chowing down, our older son, who was about 9 at the time, said, "this pumpkin pie is sure good Grandma". "Thank you", replied my MIL, with a gleam in her eye. After we were done with dessert, Grandma told the boys they had just eaten squash pie. The look on their faces was priceless! 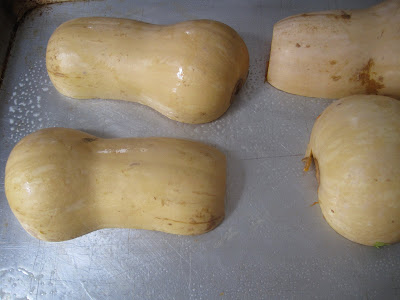 This pie is a bit of work as I had to cook the squash first. I had 2 small butternut squash to use. To prepare the squash for baking, I first cut off the stem end. You will need a very sharp knife for this. Then the squash is split down the middle and the seeds and strings are scooped out of the squash and then baked on an oiled baking sheet in the oven until tender. Scoop out 1 3/4 cup of sweet, delicious orange flesh and you are ready to begin. 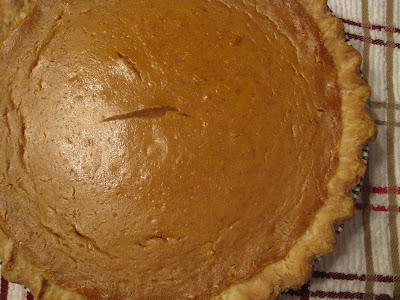 I pureed the squash in the blender, but you can use a food processor if you have one. Add the pie ingredients and pour into a prepared pie crust and bake. Let cool completely. Don't be tempted to cut the pie before it is cool. Top with some fresh whipped cream and you'll have a dessert that is hard to beat! Let me know if you try this pie. Here's how it's made. 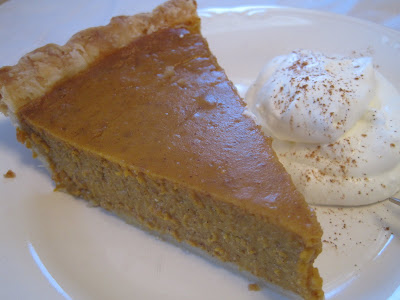 BUTTERNUT SQUASH PIE
from Lynda's Recipe Box
Ingredients:
1- 9 inch pie crust- (I made a 9 inch deep dish crust.) or use a pre-made crust
1 3/4 cup of baked butternut squash
1 (12 ounce) can of milk
2 eggs
3/4 cup of granulated sugar
1 1/4 teaspoon ground cinnamon
1/2 teaspoon ground ginger
1/4 teaspoon ground nutmeg
1/4 teaspoon ground cloves
To prepare squash, Cut of the stem end of squash with a sturdy sharp knife. Cut the squash lengthwise in half, and scoop out the seeds and any strings around the seeds. Spray a baking sheet with cooking spray and place squash cut side down on the pan.Place in a 400 degree oven and bake until the squash are tender. The small one took about 40minutes, but larger ones will take longer. When done, remove from the oven and let cool. Scoop out the pulp of the squash, 1 3/4 cup for the pie.The squash can be baked 1 or 2 days before you make the pie.
Place the squash pulp in a blender or food processor. I used a blender, so I added the eggs and pulsed it together. I ended up having to add some of the milk to blend it well. After it is purred, add the remaining ingredients and blend just until incorporated. Pour pie mixture into a prepared pie crust. Bake in a preheated 425 degree oven for 15 minutes. Then reduce the heat to 350 degrees and bake until done, about another 30-40 minutes. Give the pie a shake and if the middle doesn't jiggle it is done. Or, you can test for doneness by sticking a knife in the middle of the pie. If it comes out clean it's done. There may be a few cracks on the surface. Let pie cool completely before cutting. Serve with whipped cream on the side and enjoy. Butternut Squash Pie is delicious! It's a perfect ending to a Thanksgiving meal, or any meal for that matter.
Hope you give it a try!
What's your favorite Thanksgiving dessert? 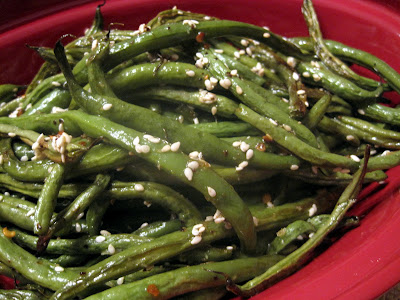 I have a new favorite green bean recipe now that is bursting with garlic and sesame flavor. I saw a recipe in a Cook's Illustrated magazine which was more involved than I wanted, so I just reduced and eliminated some of the ingredients and just used garlic and sesame for these yummy beans. The garlic is definitely assertive, but it does not over power the sesame seeds. The sesame flavor is very evident, which caused my husband to proclaim these beans as "awesome"! Make your taste buds happy and give these a try!

Heat oven to 450 degrees and line a baking sheet with aluminum foil. Spread beans on foil; drizzle the olive oil over the beans and toss well to distribute the oil. Sprinkle with coarse salt. Roast beans for 10 minutes.
Toast the sesame seeds in a pan for about 30 seconds until fragrant and slightly golden. Mix the sesame oil, red pepper flakes and garlic together. After the beans have roasted for 10 minutes in the oven, remove the pan from the oven. Using tongs, coat the beans with the sesame oil, garlic and red pepper mixture. Spread the beans out and place back in the oven for another 8-12 minutes. Green beans will appear shriveled and have golden brown spots when done. Remove from oven; adjust seasoning and toss with the toasted sesame seeds and serve. Enjoy!
Posted by Unknown at 7:38 PM 12 comments: