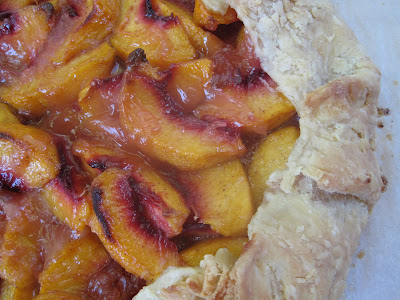 I love fruit pies, but I don't like making them. Don't get me wrong, I do occasionally make a pie, but they can be rather time consuming, and I'm an impatient cook. But I love buttery, flaky crust and fresh, in season fruit together. This past week I purchased some humongous, juicy, Missouri peaches at the farmer's market, and knew I'd have to make a pie. They aren't the first peaches we've had, but the others have ended up sliced over ice cream, or just eaten out of hand. I wanted pie this time, but maybe a galette instead. A galette is less intensive to make since you only need the bottom crust. It is also known as a crostata, or a rustic fruit tart. There's even the option of using refrigerated pie crust from the store. But I wanted to make my own crust for these amazing, juicy peaches. And the peaches were so juicy that the crust on my galette leaked, a lot. Even then, there was still plenty of juice left in the pie. Actually, I've made two of these this week; one was peach and blueberry. Both were fantastic and my husband is practically begging for another. Hmmm, I think apple will be next! 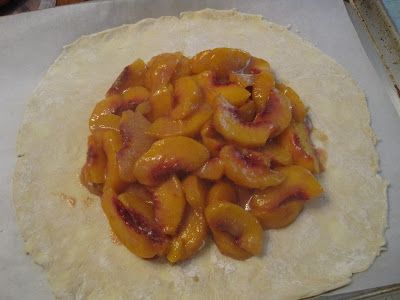 Roll out the crust to about 13 inches in diameter. Top with sliced peaches that have been sweetened. Keep them in the center with about 3 inches of an edge all the way around. 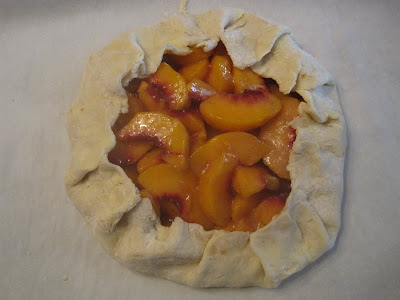 Fold over the edges and just kind of pleat the crust and pinch the pleats together. Sprinkle with a little sugar if desired. Bake until the crust is golden. Let it cool! There is so much juice that you'll lose a lot if you cut it too soon. Here's the recipe. 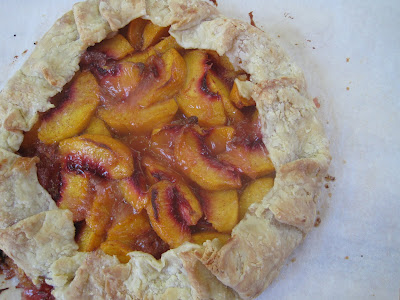 PEACH GALETTE
from Lynda's Recipe Box
CRUST:
1 1/4 cup flour
8 tablespoons (1 stick) unsalted, cold butter, cut into smaller cubes
1/4 teaspoon salt
4-6 tablespoons ice cold water
In a bowl mix the flour and salt together. Add the cold butter and cut into the flour with a pastry blender. If the butter gets warm, chill the flour mixture before adding the water. Add 4 tablespoons of ice water and quickly work into the crust to bring it together into a ball. Add more water if needed. Don't overwork the crust. Place crust on plastic wrap and flatten it into a round disk.Wrap tightly and place in the refrigerator for at least an hour. When ready to form the crust, take it out and let it set on the counter for about 20 minutes. Flour a work area and roll crust into a 13 inch circle. Line a baking sheet with parchment paper. Transfer the crust to top the parchment paper.
PEACH FILLING:
2/12 - 3 cups of fresh peaches, peeled and sliced- or other fruit or berries
1 tablespoon fresh lemon juice
1/2 cup granulated sugar
1/4 teaspoon ground cinnamon
2 tablespoons cornstarch
Mix the cornstarch, cinnamon and sugar together in a bowl. In another bowl slice the peeled
peaches into large slices. Sprinkle the peaches with the sugar mixture and mix together. Spoon the peaches onto the center of the rolled out crust. Fold the crust over the fruit and pleat it together. You can sprinkle sugar on the crust, if desired. Bake in a preheated 400 degree oven for 40 - 50 minutes, or until the crust is golden. Remove from oven and cool. Enjoy with ice cream or whipped cream!
NOTE: Be sure to measure your crust; if it is smaller than 12 inches, you'll need to use less fruit.
Posted by Unknown at 10:17 PM