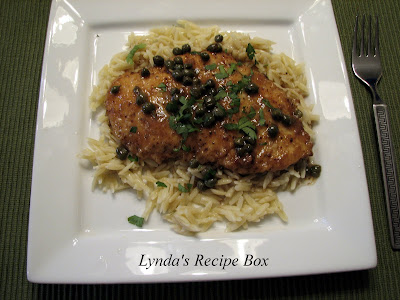 I wanted to try making Chicken Piccata the other night. I've had it at a restaurant a couple of times and thought it was very good. It is also a very quick dish to prepare, making it perfect for a week night meal, or a special meal anytime. The chicken breasts I had were very large so I butterflied them and cut them in half. To do this, lay the chicken breasts on a cutting board and cut them in half using a very sharp knife. This will give you 4 servings. If you have small chicken breasts, lay them between sheets of plastic wrap and pound until the meat is an even thickness all over. They won't need to be cut in half if small. This recipe calls for a lot of butter and olive oil, which I cut down some. I also used less fresh lemon juice than called. Unfortunately I thought this dish was still a bit too tart. Even though this is a restaurant quality dish, this Chicken Piccata was not a hit with my family. It was as good or better than what I've had when eating out. My 22 year old daughter thought the lemon was too harsh. My husband wasn't overly fond of it, saying it was just OK. So even though I liked it, I probably won't make it again. Not if I'm the only one eating!
Here's the recipe. If you try it, let me know how you liked it. 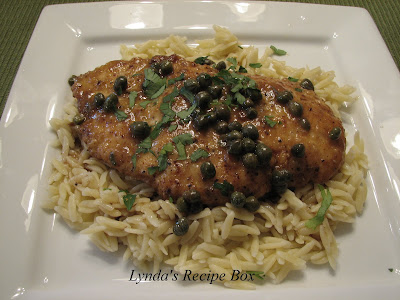 CHICKEN PICCATA (adapted from Giada De Laurentiis)
2 skinless, boneless chicken breasts, butterflied and cut in half
sea salt and black pepper
1 cup all purpose flour for dredging- Recipe calls for 2 cups, way too much
4 tablespoons unsalted butter- recipe calls for 6 T.
4 tablespoons olive oil- recipe calls for 5 T.
1/4 cup fresh lemon juice- recipe calls for 1/3 cup
1/2 cup chicken stock
1/4 cup brined capers, rinsed well
Directions
Season chicken with salt and pepper. Dredge chicken in flour and shake off excess.
In a large skillet over medium high heat, melt 1 tablespoons butter with 2 tablespoons olive oil. when butter and oil sizzles, add 2 pieces of chicken and cook for about 3 minutes. Turn chicken over when golden, and cook on the other side for 2-3 minutes. Remove chicken to a plate. Add 1 more tablespoon butter and 2 tablespoons oil to the skillet. Add the other 2 chicken pieces and brown as before. Remove these to the plate.
Reduce heat to medium low and add the chicken stock, lemon juice and capers. Bring to a boil and stir, scraping up all the brown bits from the pan for flavor. Check seasoning. I added about 1/4 teaspoon salt and the same for pepper, but it may depend on how much salt is in the chicken stock. Return chicken to skillet and simmer for 5 minutes. Remove the chicken to a platter. Add remaining 2 tablespoons butter to the sauce in the pan and whisk vigorously. Pour sauce over chicken and garnish with parsley. I platted the chicken over cooked orzo and it soaked up the sauce nicely. I've also had it with garlic mashed potatoes and it was yummy!
Is there a dish you like that the rest of your family doesn't?
Posted by Unknown at 9:06 PM