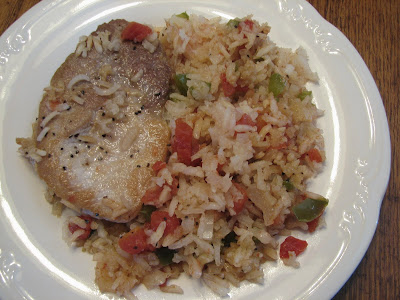 Several weeks ago, I won the cookbook, da cajn critter, The Lifestyles, The Rules, and Makin' Groceries, from Dave at My Year on the Grill. Dave did a great review of this cookbook and made several recipes which you can read about here. Dave and his wife have now moved to the Vigin Islands, and I'm so jealous! But I was excited to add another cookbook to my collection and I eagerly read it when it arrived. This is a fun cookbook to sit down and go through. Written by Pamela D. Lyles, it is a wonderful book for any home cook that enjoys Southern food. At first, I was disappointed because there are no photos, but the recipes in this book have plenty of directions and are easy to make. This is a collection of her families recipes through the years, and I found some that my family also claims. 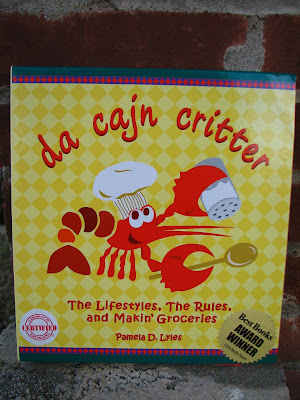 There are recipes with the relatives name attached to the dish, such as Aunt Pitty Pat's Blinz Casserole, and Pablo Miller's Caesar Be With You salad. I love it! There are a number of grilling recipes, as well as favorites like Sally Rue's Tuna Casserole. Of course there's also Jambalaya, Boiled Shrimp and Crayfish Boil and lots of other Southern favorites. And there's many great sounding desserts, such as Fruity Coconut Pecan Bread Pudding, and Mom Hinnant's Red Velvet Cake. I started with Creole Pork chops and Spicy Rice, as I need a fairly quick meal for my husband and I one hectic day. This was a delicious meal. The pork chops were very moist and wonderfully seasoned from cooking in the spicy rice. I only made half a recipe, since there was just my husband and I. I will be making it again in a couple of days. The chops are browned in a skillet, and then the rice and rest of the ingredients are added. While it is supposed to cook for 45 minutes or so, mine was done in 30. But that could be because I made half of the recipe. I used less oil than called for, and used cayenne pepper in place of hot red pepper sauce. Also, I used canned tomatoes instead of fresh, because tomatoes right now aren't that great. I hope you'll give this dish a try! 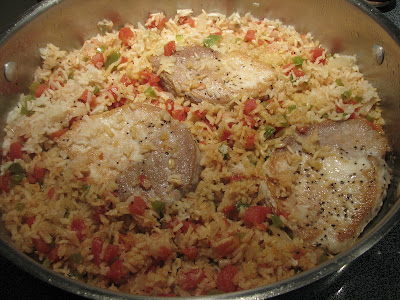