Peanut Butter Fudge ( and a reminder for December's "Family Recipes: Memories of Family, Food and Fun") 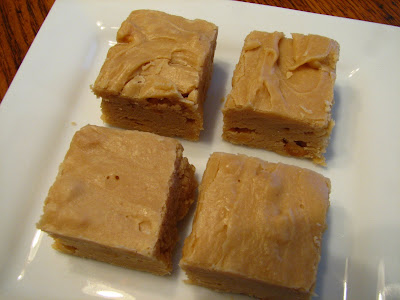 Before I get into my sugary post, I'd like to remind everyone who's interested, about December's roundup for "Family Recipes: Memories of Family, Food and Fun". The deadline to send me your family recipes is December 30. Go here to read all the rules. While you're cooking up your old family recipes for the holidays, just send me the link to your recipe, a picture and you can be in the roundup!

Now, for the Peanut Butter Fudge! I'm not a master candy maker, but my Mother taught me how to make fudge, so I usually make it at Christmas time. Mom made chocolate fudge every year that I can remember, and later when I married, I learned how to make Peanut Butter Fudge. It's not hard, but you do have to plan for time to do it. You must have all the ingredients ready before you begin. Have the dish that is going to hold the fudge already buttered. Do not answer the phone-let the answering machine pick up your calls. If you get sidetracked, you can overcook the fudge, which is not a good idea. After saying all that, fudge does not take much time to make really, maybe 20 minutes from start to finish. So it's not time consuming to make, but you just can't leave it alone after starting. I learned how to make fudge the old fashioned way, by testing for the soft-ball stage using a bowl of cold water. Taking a spoon of the boiling candy liquid, you pour it into the bowl of cold water to see if it makes a soft ball. With your finger, you try pushing the syrup into a soft ball. If removed from the water, the ball will lose its shape. This is called the soft ball stage. The easiest way to do this is by using a candy thermometer. Clip it to the side if the pan and when the boiling syrup reaches 235 degrees, it is at the soft ball stage.

Believe it or not, the weather can affect your candy. If the air is humid, the cooking time can be longer and the candy may take longer to set up. If possible, make your candy on a day with low humidity. I found this yummy recipe in an old church cookbook that I've had since before I was married. Translation: I've had this about 35 years, but it's a good one! The fudge is rich, creamy and decadent and so delicious that I doubled the recipe! I promise that I gave half of it away! This fudge is far too tempting to have a large pan lingering in my house, because I'm weak, very weak. Use the best ingredients that you can afford as sometimes off brands do not perform well. This recipe makes a small pan of fudge, so it's a good one to start with. Let's begin, shall we? 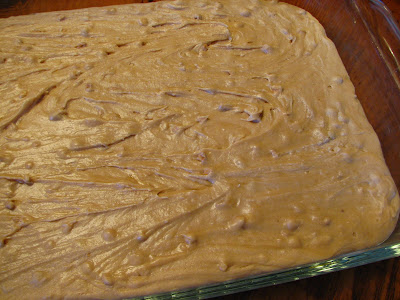 Butter a 8x8 inch pan and set aside. In a large, heavy bottomed pan, combine the sugar and milk. Heat pan over medium heat until the sugar mixture comes to a rolling boil. A rolling boil means that there will be lots of large bubbles breaking the surface of the mixture as it cooks. The syrup will rise high up in the pan, so make sure you do use a large pot. Clip a candy thermometer inside the rim of the pan, making sure it reaches into the hot syrup. Carefully stir the boiling syrup with a wooden spoon to keep it from sticking. Continue to cook the fudge to the soft ball stage, 235 degrees F. Remove the pan from the burner and stir in the butter, marshmallow cream, peanut butter, and vanilla. Stir until the fudge starts to thicken and the ingredients are well combined. There should not be visible white streaks from the marshmallow cream. Carefully pour the hot fudge into the prepared pan. Do not scrape the hot fudge off the sides of the pan, as it will contain hardened sugar crystals that will tend to make your fudge grainy. Smooth out the fudge and let it cool away from the hot stove. It will take at least 2 hours to completely cool, maybe more. Cut into squares and enjoy this creamy confection! This fudge may be stored, covered, in the refrigerator for 2 weeks or more. Let it come to room temperature before serving. However, I've never had a pan of fudge last that long. I add it to goodie trays and we eat the rest. This is awesome Peanut Butter Fudge!
NOTE: Some recipes suggest using a wet pastry brush to wash down the sides of the pan as the fudge cooks, to keep sugar crystals from forming. I have not tried this, so if you have and it works, please let me know in the comments!
Posted by Unknown at 9:24 PM