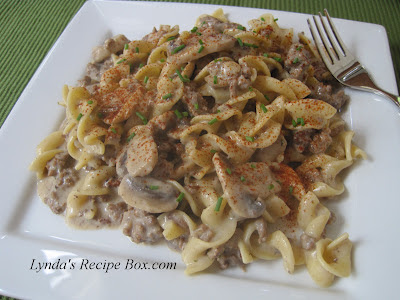 Recently I was flipping through the 2009 Cooking Light Cookbook, when I came upon a recipe very similar to one I made waaay back when I was in high school! This was about 1969 or 1970, many years ago when "groovy" was the favorite word, mini skirts and Go-Go Boots were "in" and the Beatles were the most popular singing group! I was taking home Economics in school, with one semester of sewing, and the other semester was cooking. I still have several recipes that we made that year, although I haven't made any of them for ages! Well, I saw this recipe in Cooking Light, so I made it and my husband really liked it, plus, it took less than 30 minutes to make. Even though this dish is made with ground beef, it still has the yummy sour cream sauce and delicious mushrooms that are components of stroganoff. This dish will come in really handy this holiday season when I'm so busy caring for my lovely granddaughter, who is now 4 months old, and trying to keep up with all the extra we do this time of year! Think about it, in less than 30 minutes you can have a delicious and quick meal on the table. Just add a salad or veggie with it and you're good to go! I hope you'll give this delicious Hamburger Stroganoff a try!

Paprika and chopped parsley for garnish

Cook pasta according to package directions. Drain.
In a skillet over medium- high heat add beef and onion; cook for about 4 minutes, until browned. Add mushrooms and cook another 4 minutes, or so, and stir frequently until most of the liquid evaporates. Sprinkle with the flour; stir and cook 1 minute. Stir in the broth and bring to a boil. Reduce heat and simmer until broth is slightly thick. Remove from heat and stir in the sour cream and salt and pepper to taste. Serve over pasta and top with paprika and parsley. Enjoy!
Posted by Unknown at 3:18 PM