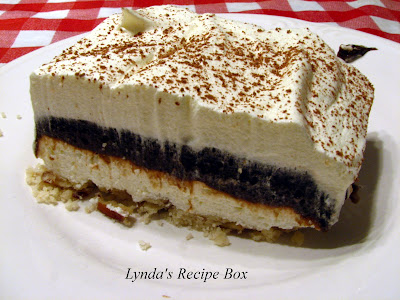 This recipe goes back quite a few years and I'm sure that many of you have made it or eaten it before. I was given this recipe about 1980 by a friend, who actually made it with pistachio pudding instead of chocolate. I've also eaten it made with banana pudding and cut up bananas, so it can be made according to what you're craving that day! I normally use the chocolate pudding as everyone in my family will eat it and we all love chocolate. This is a delicious, addictive dessert that was always requested at family gatherings or pot luck dinners at church. The first layer is a crisp crust made of flour, butter, and chopped pecans and it adds such a nutty, flaky layer to hold the rest of the dessert. 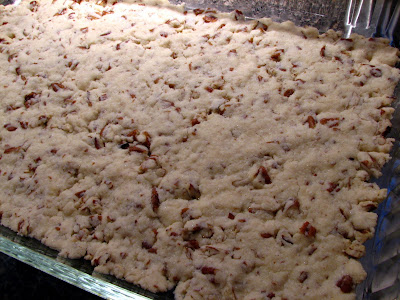 The second layer is a yummy cream cheese layer and over that, the pudding. On top goes the rest of the whipped topping, or even whipped cream, if desired. I normally top that with some chocolate shavings, mini chocolate chips, chopped nuts, or some cocoa lightly sifted over the top, to give it a nice finish. It's so good and is one of my children's favorite desserts of their childhood! 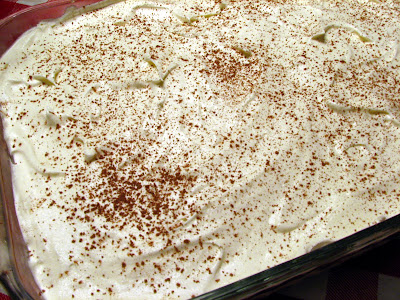 FOUR LAYER PUDDING DESSERT (from Lynda's Recipe Box)
FIRST LAYER;
1 cup flour
1/2 cup chopped nuts, I use pecans
1 stick melted butter - 1/2 cup
Combine all ingredients in a bowl; scatter the crust mixture over the bottom of a 9x13 in baking pan and press together to form a crust. Bake in a preheated 350 degree oven for 15 minutes. Cool.
SECOND LAYER;
1 -8 ounce package cream cheese, softened to room temperature
1 cup powdered sugar
8 ounces of whipped topping, thawed ( like Cool Whip)
Mix together the cream cheese and sugar; then fold in the whipped topping. Place spoonfuls of this mixture all over the cooled crust. Gently spread out the cream cheese to cover the crust, taking care to not break the crust.
THIRD LAYER;
2 packages of instant chocolate pudding (or other flavor of choice)
3 cups of milk
Combine pudding mixes and milk and stir until well blended and thick. Spoon pudding over cream cheese layer and carefully spread it out.
FOURTH LAYER;
8 ounces of thawed whipped topping ( I sometimes use a little less- it's rich!)
nuts, or chocolate to put on top, if desired
Spread topping evenly over the pudding layer. Top with nuts, chocolate shavings or sifted cocoa, if desired. Refrigerate for several hours before serving. Enjoy! 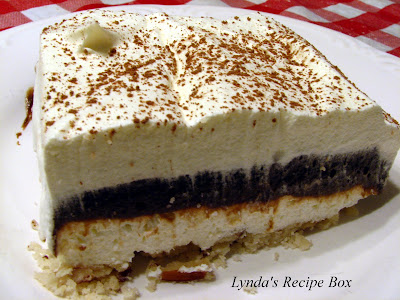 I have such vivid memories of some of the delicious dishes that my Mother used to make. This dessert is a memory maker for my kids. I can remember them begging for " just one more piece, Mom"! I'm submitting this recipe to Shelby of The Life and Loves of Grumpy's Honeybunch, and Laura, of The Spiced Life, for this months Family Recipes roundup. 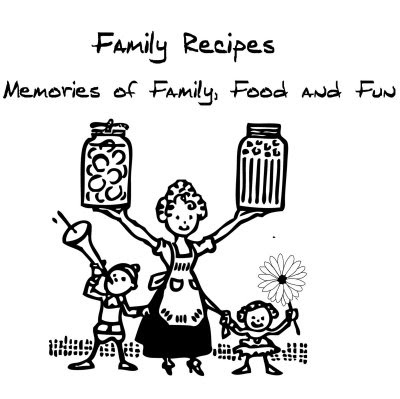 What's your favorite dessert from your childhood? Let me know in the comments!