Corn and Potato Chowder with Butternut Squash and Ham 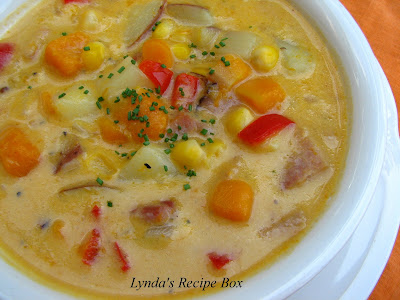 We had some unseasonably cool weather early this week , so my cravings turned to thoughts of soup. Looking through my fridge, I found that I had the makings for a really good chowder. I looked through numerous recipes, all a little different, and decided on a recipe of my own making so that I could use the ingredients I had on hand. This chowder turned out to be delicious! We loved how the smokey flavor of the ham contrasted with the sweetness of the butternut squash and corn. I used unpeeled red skinned potatoes, but you could use whatever variety you like. A pinch of cayenne pepper added a subtle "kick" of flavor to this amazing soup. I made a small batch, but now wish it had been larger as my husband and I both loved it. This chowder is very satisfying and easy to make. Let me show you how. 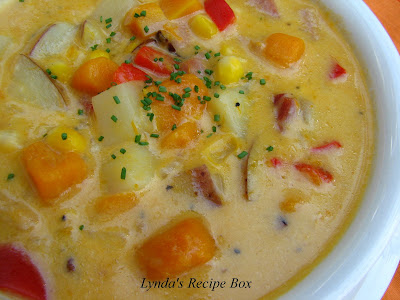 CORN and POTATO CHOWDER with BUTTERNUT SQUASH and HAM
1 cup diced onion
1 tablespoon butter
2 cups of fresh or frozen corn (thawed)
1 cup diced ham
2 cups diced potatoes (I used red skinned)
2 cups butternut squash, peeled and diced
1/4 cup diced red bell pepper
1 T. corn starch or 2 T. flour
2 cans low fat, low sodium chicken broth
3/4 cup half and half
salt and pepper to taste
pinch of cayenne pepper
Prepare all the vegetables before starting the chowder. Heat the butter in a soup pot. When butter is melted, add the onion to the pan and cook until soft. Add the corn and ham and stir and let corn roast a minute. Mix the chicken broth and the cornstarch and add to the pan. Bring to a boil; stir in the diced potatoes,red pepper and squash. Cover pan with a lid and reduce heat. Simmer for 15 minutes, or until the potatoes and squash are tender. Pour in the half and half and heat through, but do not boil. Remove chowder from the heat. Adjust the seasonings. I only needed about 1/2 teaspoon of salt because the ham was salty. A couple a shakes of the pepper shaker was enough because I added a pinch of cayenne pepper. Ladle into bowls and enjoy! Makes about 7 cups of delicious chowder! The squash and the red pepper give this chowder a rich color and great flavor. Next time I will add a little more corn, but that's the only change I'll make. I'll be making this tasty chowder again and again!
Posted by Unknown at 10:05 PM