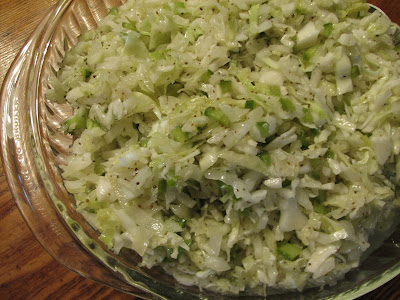 Do you like coleslaw? Not everyone in my family does, so for years I rarely made it. When I did, it was this slaw, which is big on flavor and it's one that most people will like, if they like slaw, that is! It needs to be made ahead of time because the dressing is boiled for just a bit and then poured over the shredded cabbage ingredients and then it needs to marinate for several hours. It's a recipe you should make the day before you want to serve it. It's perfect for for the 4th celebrations as you can make it ahead, and have it the whole weekend. It is supposed to last 1 week or more, but ours gets eaten waaay before then. I am lucky if it lasts 4 days as my husband loves this stuff and will eat it for a snack! I found this recipe in a couple of church cookbooks even before I was married, so I don't know it's origin or how long it's been around. I do have another slaw recipe, but decided to share this one because it can be made ahead, which frees up your time some on the day you want to serve it. So, let's make slaw!

24 HOUR COLESLAW
1 medium head of cabbage, shredded, about 2 pounds; ( or use the bags of preshredded cabbage from your store)
1 onion finely diced
1 green bell pepper finely diced or shredded
Place cabbage, onion and bell pepper in a very large bowl
Dressing mix:
1 cup sugar
1 cup white vinegar
3/4 cup salad oil, I used canola
1 tsp. celery seed
1 tsp. salt
1 tsp dry mustard
Bring dressing ingredients to a boil in a saucepan. Pour over cabbage mixture while hot. Cover bowl and place in fridge for overnight or 24 hours before serving. Stir well before serving. I have a friend who adds a few sliced, stuffed olives to this slaw before serving, which adds a tasty touch, but my family won't eat them. Sigh~Anyway, this is a tangy, sweet delicious slaw which goes with any meal, indoors or outdoors, so enjoy!
Posted by Unknown at 10:51 AM