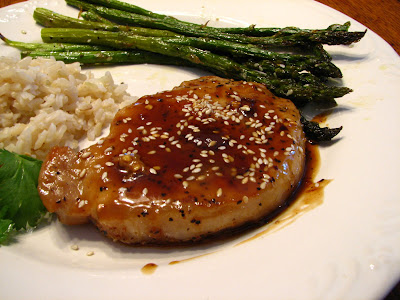 Pork chops are such an easy, versatile cut of meat to use for quick meals at home. They are usually lean and can be fixed to go with almost any cuisine. I like using them to put together really quick meals when there's just not much time! I found this recipe in a cookbook from the library. It is "Kitchen Life, Real Food for Real Families", by Art Smith. I've made it a couple of times now, so I've adapted it to our tastes. The recipe calls for 4 center cut, 1 inch thick chops with bone in. Well, at my store, these chops were thin and expensive. But I only needed 2 or 3 chops. Then I found the boneless pork loin chops, which looked thicker, and they were on sale! 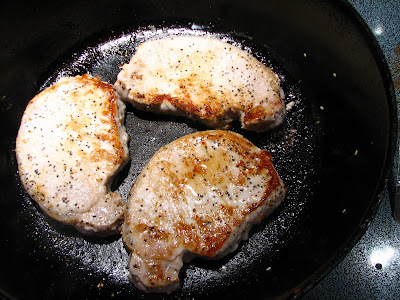 First off, you're going to toast some sesame seeds. I didn't get a picture of that. Then, to make these luscious chops, salt and pepper them and add to a hot skillet in oil. Brown on both sides. This will take about 2 minutes per side. These are smaller chops than called for. The recipe calls for 10-12 ounce pork chops, but mine were maybe 6 ounce, so cooking time was cut. After the chops have browned, remove them from the skillet and then add the sauce ingredients to the pan and bring to a boil. 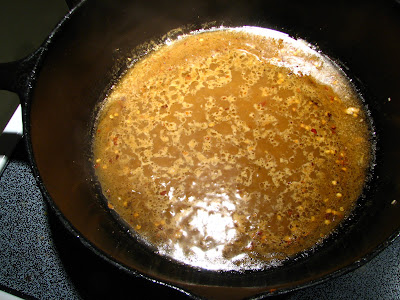 Add the pork chops back to the skillet and continue to cook for another 3-4 minutes, until they are done. If the sauce is not thick, remove chops from skillet to a plate or platter, and continue cooking the sauce until it thickens. When thick,add the toasted sesame seeds to sauce and pour over the chops. This sauce is sooooo tangy and delicious! You'll love it! Let's make this. 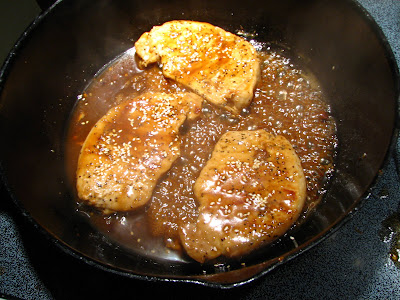 SESAME PORK CHOPS
1 Tbs. sesame seeds
1 Tbs. vegetable oil
4 pork chops (I only needed 3)
salt and pepper
1/2 cup chicken broth; reduced sodium
2 Tbs. rice vinegar
2 Tbs. brown sugar (I used more brown sugar; recipe called for 2 tsp.)
2 tsp. Dijon mustard
2 tsp. dark Asian sesame oil
1/4 tsp. crushed hot red pepper flakes
Heat a large skillet over medium high heat. Add the sesame seeds and cook, stirring often until they are golden. Remove the seeds to a plate. Add vegetable oil to the skillet. Season chops with salt and pepper and add to skillet and brown on both sides, turning only once. This will take 4-5 minutes. Place chops on a plate and pour off fat from skillet, if any. Add to skillet the broth, vinegar, brown sugar, mustard and sesame oil. Stir and bring to a boil. Place chops back in skillet and sprinkle with the toasted sesame seeds. If you are using SMALLER chops like I did, they will be done in about 3- 5 minutes. If using the LARGER chops that the recipe calls for, you will need to cover the skillet with a lid for up to 20 minutes. When chops are done remove to a plate or platter. If the sauce has not thickened enough, continue boiling it until desired consistency. Pour sauce over the chops. Enjoy! 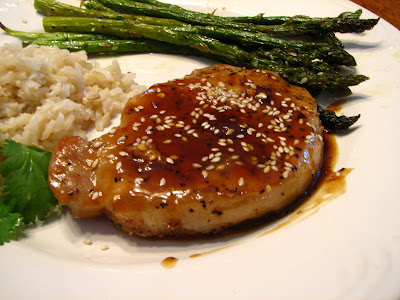 I served these Sesame Pork Chops with brown rice and Oven Roasted Asparagus. I drizzled some sauce on the rice and loved it so much that next time I may increase the amount of sauce. Also, I used more brown sugar than the recipe called for, as I thought the mustard was too strong. This was a fantastic meal, highlighted by the tangy, tender, Asian flavored pork chops.
The hot pepper flakes do add some heat, so if you have kids that can't handle it, just leave out the flakes. The sauce will still be great without the extra kick. Do you use pork chops for quick meals?