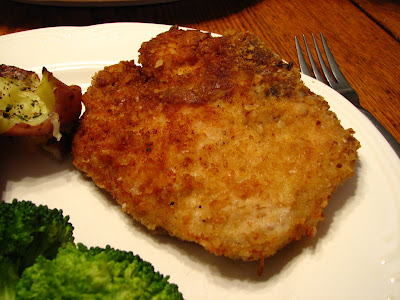 I don't eat very many fried foods any more, but once in a great while I get to thinking about some dish that my Mother used to make and suddenly, I want to make it. She used to make the very best Fried Chicken and the best Breaded Pork Chops, and of course they were fried. I only make the Fried Chicken maybe yearly now. And the pork chops, about as often, but when I start craving them, I just have to get the skillet out and make them! Then, it's out of my system for another year! Mom always used crushed saltine crackers for the breading for the pork chops and they are always crisp and delicious. First, I make an assembly line, and in 1 bowl I mix an egg. 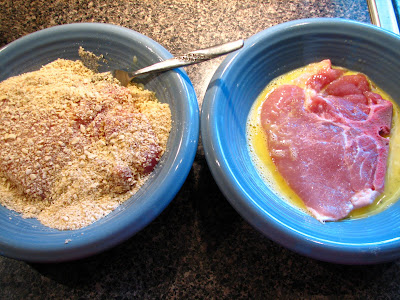 In another bowl, I add the crushed saltine crackers. You need a large skillet with plenty of room for the chops so they won't overlap and they can brown evenly. In the skillet, heat the oil until hot and add the chops. Brown well on one side, and then flip over to brown till done. 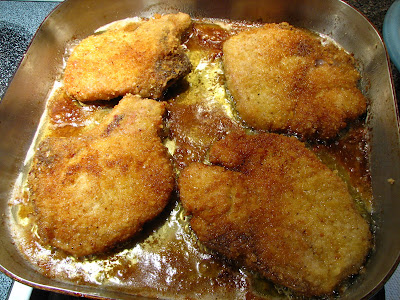 These are thin, bone-in loin chops, so they cooked quickly. If they start to brown too much, turn down the heat. The thin chops only took about 10 minutes, but you can use thicker chops, if desired. If the chops are really thick, 1 inch or more, brown them and then finish in the oven.
Drain on paper towels and arrange on a platter, if desired! Time to eat! Here's how to make these; 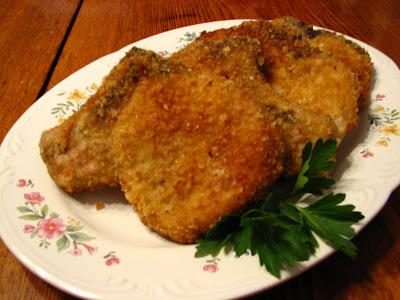 Mom's Breaded Pork Chops
4 bone-in pork chops
1 cup finely crushed saltine crackers
1/2 tsp. salt
1/4 tsp. pepper
1/4 tsp. garlic powder
1/2 tsp. paprika
1 large egg, beaten
In a bowl large enough for chops, beat the egg. In another bowl, add the crushed saltines. To crush the crackers, I place them in a plastic bag and then use a rolling pin to crush them. Just roll it over the bag and crush until they are very fine crumbs. Next, heat oil in a very large skillet over medium high heat. Using a fork, pick up one chop and place in egg. Turn over making sure to coat well with the egg. Shake off the excess egg, and then lay pork chop in the crumbs, and then turning over to coat the other side. Press the crumbs into the chops if there are some places where they don't adhere. Lay the chops into the skillet in the hot oil. If they brown too fast, turn down the heat. It will take maybe 5 minutes before you will need to turn the chops over. It just depends on how fast they brown and how thick the chop. These chops were done in about 10 minutes. They were crisp on the outside and moist and tender on the inside; in other words, wonderful! OK, I've had my Breaded Pork chops, so I'm good for another year or so! Have you cut down on fried foods, or do you even like them?