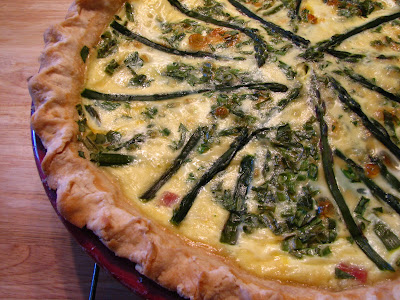 This last week, I had some leftover ham after our Easter meal, so I decided to make a quiche with some of it. I hadn't made one in quite awhile, so I began looking to see if I had the right ingredients, or if I would need to go to the store first. I decided to use what cheese I had at home, which would be cheddar cheese instead of Swiss, but that sounded good to me! I didn't have a prepared crust, so I made one and prebaked it for about 10 minutes, and let it cool while preparing the rest of the filling. I used some steamed asparagus and fresh herbs also. 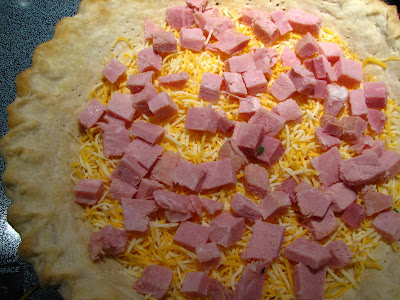 After the crust was cool, I first sprinkled some preshredded cheddar jack into the crust,and then topped it with a cup of diced ham and some cooked asparagus cut in about 1 inch lengths. I added some sauteed onion next, and then I mixed my eggs and some half and half together really well. To the eggs, I added parsley, chives, salt and pepper, and poured it in the pan. 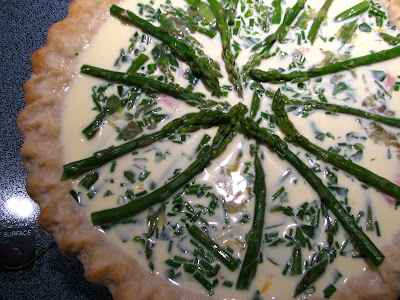 I placed some asparagus spears on top just for decoration and popped this baby in the oven for about 50-55 minutes, as this is a large quiche. When done, let it rest for 20 minutes or so before delving into it. It was so delicious, even if it didn't have Swiss cheese. The cheddar was great with the ham and asparagus and I loved the fresh herbs in it. My husband loved it and was more than happy to eat it, which was great, as I was wondering why I had made such a large quiche? This recipe will fill a 10 inch deep dish pie pan. You may make your own crust or buy a premade crust from the store. So, let's make some quiche! 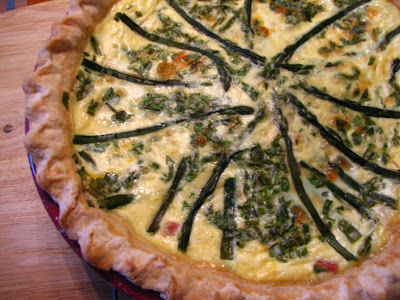 Ham and Asparagus Quiche
1 baked 10", deep dish pie shell, cooled
1 1/2 cups cheese, Cheddar, Swiss, parm, or cheese of your choice
1 cup diced, cooked ham
1/4 cup diced, cooked onion, if desired
1 cup cooked asparagus, cut into 1 inch pieces
5 large eggs, beaten
2 cups half and half, or you may use half milk and half heavy cream
1 T. chopped flat leaf parsley
1 T. chopped chives
salt and pepper to taste
Using a fork, prick the bottom of a 10 inch, deep dish, pie shell and then bake at 425 degrees for about 10 minutes and remove to a rack to cool. REDUCE heat to 350 degrees. After crust has cooled, add the cheese, then the ham and onion if using, and then the asparagus. Next, mix the eggs and half and half together. Stir in the herbs and salt and pepper and pour over the asparagus. Add some asparagus spears on top, if desired. Transfer the pie to a baking sheet and place in the oven. Bake at 350 degrees for about 50-55 minutes until done. Quiche will puff up when done and when given a shake the filling will not jiggle. You can test it, if desired, by inserting a knife in the middle and it will come out clean when it's done. Cool at least 20 minutes before slicing. Enjoy! Do you like quiche?