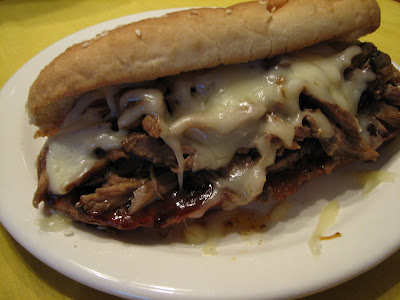 The baked Pork Shoulder Roast that I cooked the other day for Carnitas was so good and I had so much meat that I froze some and still had enough left for a few sandwiches. The roast had been quite lean, plus the spices used made it also delicious as a barbecue sandwich. In fact, son number 2 prefers to make barbecue sandwiches with it. The meat was seasoned well so the sandwiches were very flavorful.

To make the sandwiches, heat the meat in a pan in the oven and remove it when warm enough. Turn the broiler on. On a baking sheet, lay out flat the buns you are going to use, and stick the pan under the broiler. Stay right by the oven and watch it closely as the bread browns quickly!

When slightly toasted take pan out of oven and slather some of your favorite barbecue sauce on the bottom half of bun. My husband wanted cheese on his, so I shredded some Monterrey Jack cheese and topped his sandwich with that. Back under the broiler it went for just a minute, until the cheese melts a little and then remove from the oven. You have a very delicious, satisfying sandwich that will make you happy the rest of the day! Well, that might be too powerful for a sandwich to accomplish, but they are mighty good. How do you use up a pork roast?
Posted by Unknown at 8:43 AM